Jay-Z’s “The Story of O.J.”, from his 2017 album 4:44, is an absolute masterpiece on every level, a song that scathingly explores racial politics, and the accompanying video is every bit a perfect match to the content.

END_OF_DOCUMENT_TOKEN_TO_BE_REPLACED

Young Thug’s “Wyclef Jean”, as directed by Ryan Staake, is one of the more fascinating music videos in recent memory, an almost nightmarish surrealist statement. The video simultaneously details and depicts the result of a typical hip hop music video shoot, replete with images of scantily clad women dancing sexually and opulence, tempered through the idiosyncratic vision of rapper Young Thug, who ultimately never showed up for the shoot. Watching “Wyclef Jean” is akin to watching a slow motion car wreck.

END_OF_DOCUMENT_TOKEN_TO_BE_REPLACED

Ill Communication is not the Beastie Boys best album (that title goes either to their debut, Licensed to Ill, or their sophomore album, Paul’s Boutique); but it does feature their best single song, and its accompanying iconic music video. Directed by a 25 year-old Spike Jonze, the video features the members of the Beastie Boys appearing in the opening credits of a police show in homage to 1970s TV shows such as Hawaii Five-O and Starsky and Hutch.

Seeing the Beastie Boys appear with 1970s era mustaches and hairstyles, with the accompanying action, all filmed in a style reminiscent of the 1970s – it just works. It’s a crime that “Sabotage” didn’t win the MTV Video Award for Best Music Video, just a crime. This isn’t the only great music video directed by Spike Jonze, but it’s certainly the most memorable.

Most DJs sample two or three pieces of source music at a time when creating their own music; Australian band The Avalanches use 100-200 source samples, so to say that The Avalanches aren’t much like most other bands is a bit of an understatement. Released in 2000, The Avalanches debut album Since I Left You is a simply fantastic album, and the song, Frontier Psychiatrist, and its accompanying video, make for one of the most absurd, yet musically satisfying, combinations in memory. It’s also, perhaps, the only song that can be said to have a parrot solo, so thank god for that.

Thankfully for all of us, after a 16 year hiatus, The Avalanches finally released their follow-up to Since I Left You, Wildflower, last year; while it didn’t quite live up to the standard of their debut, it’s a wholly satisfying album in its own right.

This is a relatively early music video for the 1977 Devo cover of The Rolling Stones’ “(I Can’t Get No) Satisfaction”. Obviously the original song is one of the most iconic of music history, but Devo manages to stamp their version as uniquely their own, with a frenetic energy.

The video itself does a great job matching the frenetic energy of the music, with fast-paced edits and repetitive cuts matching moments from the song. It brings to mind future music videos by bands such as OK Go and The Avalanches. While it maybe doesn’t tell a coherent story as we sometimes expect music videos to do, it’s very visually interesting, especially with Devo’s signature yellow jump suits. 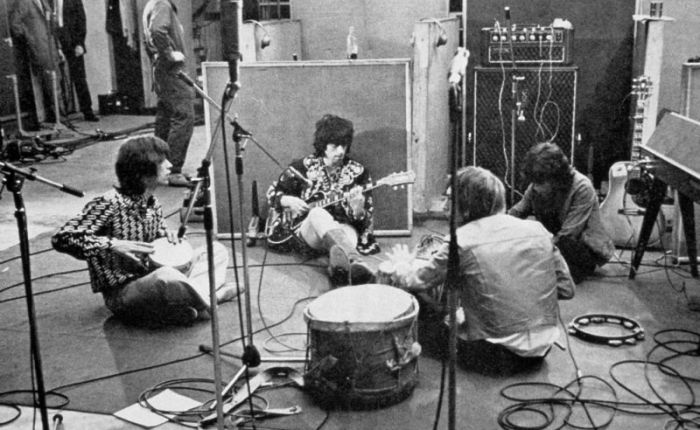 What is the nature of genius? It’s so easy to imagine a revolutionary work of art, a great song, movie, or novel, simply springing out of its creator’s head on command. Wrong. Auteur theory teaches us that a film is a director’s sole creative vision. We often look to creators of art as great individuals, single and solitary in their creative process. Wrong.

In 1968, The Rolling Stones were at the peak of their abilities as musicians, and as songwriters. From 1968 to 1972, they would rattle out some of their most iconic albums, Beggars Banquet, Let It Bleed, Sticky Fingers, and Exile on Main St. Put those four albums up against the best four albums of any other band. You’ll be hard-pressed to find many that compare. END_OF_DOCUMENT_TOKEN_TO_BE_REPLACED