I’ve had the opportunity to watch a lot of stuff this November and I wanted to give a quick roundup on it all, particularly since it’s been quite good for the most part. So, here are my quick takes, in no particular order:

Master of None (Netflix)

I wrote about this show back in April when it was first announced, and I was very excited about it – it seemed like a perfect mix of platform, writers, and on-screen talent. The result, Master of None, isn’t exactly what I had anticipated – but it’s exactly as great as anticipated. As expected, Aziz Ansari and Alan Yang bring a unique comic vision to tackling subjects like modern romance, life in the city, and what it’s like to be the child of an immigrant. It’s a great blend of comedy and sweetness that never feels overly twee. The real breakout discovery of this show is former SNL cast member Noel Wells, who has a star turn as the main character’s love interest and captures the audience in her time on screen.

You’re the Worst is a show I had been meaning to watch for quite a while now, but had never quite gotten around to forcing myself into. “A sitcom about two awful people…”, I thought, “… haven’t I already seen this before?”. As it turns out, You’re the Worst is something new and special on TV – a sitcom about the ugly sides of people that is interested in actually humanizing that ugliness. Other shows about awful people (It’s Always Sunny in Philadelphia comes to mind) are rarely interested in actually exploring why characters are the way they are, or whether they can actually be happy. You’re the Worst is all that – it’s a truly heartfelt comedy that, in its second season, has stepped into an exploration of depression and how it can affect those around you. Of course, it helps that the four lead actors of this show (particularly Aya Cash) do some real heavy lifting in helping to build audience sympathy. It’s a winning combination of heartfelt and comedic moments. 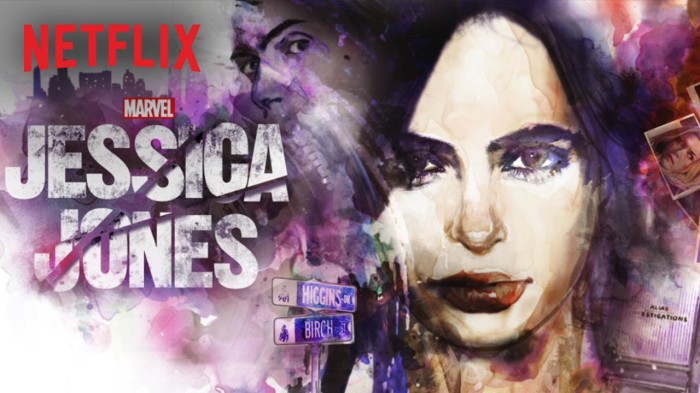 Jessica Jones is not an easy show to pin down. It’s a noir mystery thriller that owes a serious debt of gratitude to Veronica Mars; it’s a well-drawn superhero show that surpasses almost everything Marvel has done to this point, and it’s also a show with something on its mind. It’s that last part that is, perhaps, the key to what makes everything else about Jessica Jones tick. There is rarely a moment in the first season of Jessica Jones that doesn’t feel like it is meant to contribute to an overarching storyline about loss of control, and ultimately, rape. It’s not a “fun” subject matter, but the outstanding casting of Krysten Ritter in the lead role helps to bring a light touch to the affair. David Tennant’s Kilgrave is among Marvel’s best cinematic villains thus far, joining Vincent D’Onofrio’s Kingpin in a villains hall-of-fame that is, to date, fairly weak. Whatever formula the two Netflix shows that Marvel has created have used, it’s a successful one that bears repeating.

The Man in the High Castle (Amazon)

Amazon’s The Man in the High Castle should be right up my alley. A thriller about an alternate history in which the Axis won WWII? Given my enthusiasm for 2014’s Wolfenstein: The New Order, this should be an easy home run.

So it’s something of a disappointment to say that three episodes into this ten episode series, I really haven’t felt like this has hooked me yet. I’m not sure exactly what about it is leaving me cold, but I do know that especially after watching shows that felt like they had something to say in Master of None, You’re the Worst, and Jessica Jones, The Man in the High Castle falls flat at least partially because it doesn’t really feel like it has a message or underlying theme. It presents a fascinating world filled with politics and intrigue, but it doesn’t really feel like it means anything yet.

James Bond has a soft spot in my heart, so I’d be lying if I said that I didn’t thoroughly enjoy Spectre. But, with that said, I did come out of the film feeling like it had squandered a lot of good will. For one thing, it felt like there was only one really unique setpiece (Dia de los muertos in Mexico City) in a film that should be filled with interesting setpieces. So that was an obvious disappointment. Going beyond that, however, the Bond girls played by Monica Belluci and Lea Seydoux both fell flat to me. In particular, Seydoux’s character felt problematic to me given that a mere two scenes after she promises to kill Bond if he tries to step into bed with her, she ends up falling into bed with him. Seydoux is a thrilling, fun-to-watch actress who can really pull off action sequences (if you’re in doubt, check out Mission: Impossible – Ghost Protocol) – so it seemed like a massive waste to have her here in this loser of a role.

The other major misfire of this movie for me was everything to do with Franz Oberhauser (Christoph Waltz) – or should I say, Ernst Stavro Blofeld. Even ignoring the cheat the filmmakers used to get around giving away the big “surprise” reveal of his character (and it shouldn’t have surprised anyone), let’s be honest – if Blofeld’s secret origin is that he’s just got some daddy issues, that’s kind of a major letdown. Plus, why does every Bond movie need to tie into some kind of grand overarching story? There are plenty of Bond movies that stand on their own merits (Goldfinger, anyone?) – why can’t these movies also try to do that?

Noah Baumbach’s Mistress America, starring Greta Gerwig and Lola Kirke, is very much a spiritual sequel to one of my favorite movies from 2013, Frances Ha (also starring Gerwig). Mistress America is very much of the same spirit as Frances Ha, and while it doesn’t quite meet the lofty standard set by that film, it’s an enjoyable romp nonetheless. Gerwig continues to shine, and Lola Kirke also stands out in one of her first starring roles.

I hadn’t heard a lot about The Fall, Tarsem Singh’s 2006 masterpiece starring Lee Pace, but I had heard that it was one of Roger Ebert’s favorite movies. It’s easy to see why, as even if the story doesn’t connect personally (it didn’t for me), it’s a visually stunning film that functions on the merits of being a work of art if nothing else.

The Martian is a good reminder of why Ridley Scott is a master director who has so much to teach aspiring filmmakers. Even in his later career, when he is as likely to make a bomb as a success, he can put out an instant classic film like The Martian to show other filmmakers how it’s done. The Martian is a movie that doubles as a teaching tool in problem solving, and an advertising resource for NASA. That’s because it shows the amazing feats that ingenuity and hard work can accomplish, while simultaneously showcasing the heights that humanity can come to by working in unison. It’s a bit on the idealistic side, sure, but maybe we’re due for some idealism in our pop culture.

One thought on “Roundup: What I’ve Been Watching in November 2015”